Plastic products are used in almost every area of life and industry. From plastic bags to water bottles, from straws to six-pack rings, today’s plastic will likely become tomorrow’s marine pollution.

Surprisingly, an estimated 70%-80% of marine debris collected in the ocean comes from land-based sources via storm runoff, sewer overflows, and improper garbage disposal into rivers. The remaining 20% of the waste source is ocean-based due to fishing and nautical activities like illegal dumping of fishing nets, lines, ropes, and abandoned vessels.

Inventors from around the globe are developing and deploying smart technologies to intercept plastics from rivers and collect it in the oceans.

Researchers from Duke Nicholas Institute developed a tool that serves as a comprehensive inventory of technologies currently used or underway to help cleanup the rivers and oceans from plastics and other waste materials. To date, the inventory has a list of 39 projects for collection and 14 for prevention as remediation strategies. In this post, we will highlight some of these projects and technologies. 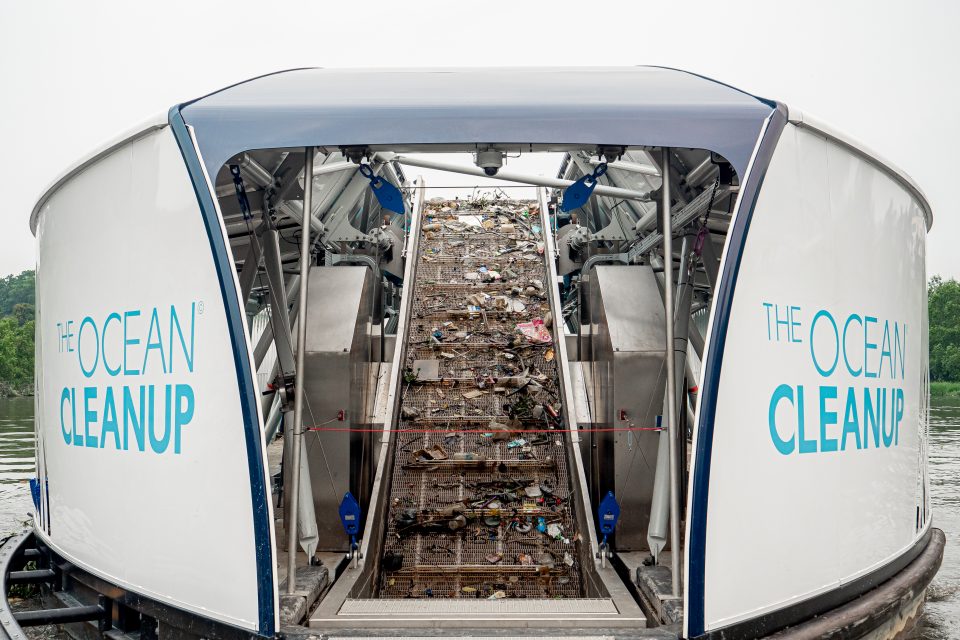 The Interceptor
The Interceptor is The Ocean Cleanup’s first scalable solution to prevent plastic waste from entering the world’s oceans from rivers.

Sustainable and autonomous, the autonomous Interceptor uses 100% solar power to maneuver and collects debris that enters the vessel with the natural current of the river. It can also automatically notify local operators once the dumpsters are full and ready to be swapped out.

As of December 2020, three Interceptors were operating in Indonesia, Malaysia, and the Dominican Republic. The Ocean Cleanup aims to address the problem of the 1000 most polluting rivers around the world to achieve clean oceans in 5 years. Watch The Interceptor in action.

Seabin
Imagine a trash bin but used underwater. As described on their website, the Seabin (V5) unit is a “trash skimmer” designed to be installed in any water body with a calm environment, like a marina.

Each Seabin unit acts as a floating garbage bin that skims the surface of the water by pumping water into the device and water is then pumped back into the marina leaving trash and debris trapped in the catch bag.

This technology can intercept floating macro and microplastics, contaminated organic materials like leaves and seaweed, and even tiny micro fibers. The Seabin V5 can be equipped with oil absorbent pads to be able to absorb petroleum-based surface oils and detergent to further clean up the water from pollutants. It is estimated to catch 3.9 Kgs of floating debris per day or 1.4 tons per year.

A diagonal tube filled with a lot of tiny holes is placed at the bottom of the river. Air is then pumped into the tube to create bubbles that will rise to the surface. The rising movement of the bubbles will generate an upward current that will help underwater trash move towards the surface where the natural flow of the river will push the pollutants to the side, where the catchments are placed.

While The Great Bubble Barrier is designed to be emptied out once per week, it will vary according to how much plastic and other wastes are caught. Plastic collected will be removed for processing and reuse.

Ocean Cleanup System
Another system developed by The Ocean Cleanup tackles plastic pollution solutions on a large scale —  focusing on the waste that is accumulated in the ocean.

The system has a long U-shaped barrier that guides the plastic into a retention zone at its end. The circulating currents in the garbage patch move the plastic around, creating hotspots of higher concentration. With the help of computational modeling, the locations of these targets are predicted and the cleanup systems are then placed in these areas.

Once the system is full, corralled trash is hauled in and removed. The net is then returned to the water to resume collections. When the trash containers on the vessel are full, they are brought back to shore for recycling.

Recycled plastic from the Pacific Garbage Patch is being made into premium sunglasses by The Ocean Cleanup. Sales of the glasses help support the organization. Get yours at The Ocean Cleanup Sunglasses.

The WasteShark is an autonomous water drone modeled after a whale shark that removes plastics, biomass, and other floating debris from the water surface.

Developed by RanMarine Technology, a Dutch startup, the “plastic-eating” catamaran was designed for use in ports, lakes, waterways, and harbors.

WasteShark can collect trash without disturbing or threatening aquatic life. Because it is electrically propelled, the drone produces zero carbon emissions, which makes it aligned to its mission to combat pollution.

Its compact design allows for easy deployment. The WasteShark can run 10 hours a day with the ability to collect up to 1 ton of waste per day. There are currently 26 WasteSharks sailing around the world including Spain and Disney Parks.

While we are making progress with marine pollution there are still significant challenges to be tackled. For instance, given the difficulty of recycling them, what should be the next step after these plastics and wastes are collected?

Dr Jesse F. Abrams, of the Global Systems Institute at the University of Exeter said “Even if we could collect all the plastic in the oceans, which we can’t, it’s really difficult to recycle, especially if plastic fragments have floated for a long time and been degraded or bio-fouled.” If they are put in landfills or burned, it will be another pollution problem to tackle.

In addition, ambitious and large-scale projects, especially by non-profit organizations, need equally gargantuan funding to be developed and sustained.

Encouraging and impressive as these projects are, the only viable long term marine  pollution solution is to reduce our use of plastic where there are viable alternatives such as glass, metal, wood and non-toxic, biodegradable materials.